The Widget scripts are for the mouse and field-focus actions performed by the user. The field-value scripts are related to internal actions Acrobat takes when a field value changes. The different types of scripts in each area are listed below.

All these scripts are accessed from the Field Properties dialog.

To display the dialog: 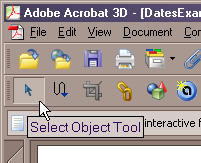 2. Right click on the form field of interest. This action displays a context-popup menu.

3. Select Properties… from the menu. This action activates the Field Properties dialog, Figure 2. 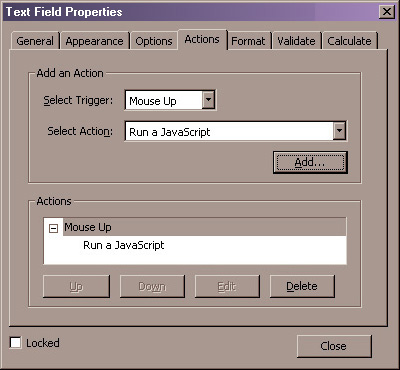 All field types have an Actions tab on their Properties dialog. This tab provides access to the Widget scripts. The “Select Trigger” pull-down list selects the action that triggers the script, MouseUp, MouseDown and so on. The “Select Action” pull-down list selects the type of action to be performed. For this tip we are only concerned with the “Run a JavaScript” action.

To add a new JavaScript action:

If the field has existing actions, they will be displayed in the Actions window. Figure 2 (above) shows the Properties dialog for a text field with a previously defined “MouseUp” script.

To edit an existing script:

There are several cases where Acrobat does not provide a user interface for accessing a particular script, yet the field will still run the script if it exists (marked as “No UI”). Acrobat does not provide a user interface because these scripts are not used with the particular field type under normal circumstances. However, this doesn’t mean that these scripts could not be useful, so ambitious users can still set the scripts using a JavaScript function.

(1) Acrobat does not provide a user interface to these scripts, but they can be set from the Console Window with the setAction() JavaScript function.

(2) In the List Field the Keystroke script is called the Select Change script.

(3) In the Signature Field the Format script is called the Signed script.

The text field uses all four of the field-value scripts, so we’ll use it as the example in the following discussion.

Format and Keystroke scripts: (both are on the same tab)

In the text field, the Format and Keystroke scripts are used together to enforce formatting. The Keystroke script ensures that only certain keys are entered and the format script adds the final touches when field data is committed.

4. Push the edit button for either Format or Keystroke to create a new script or edit an existing one. 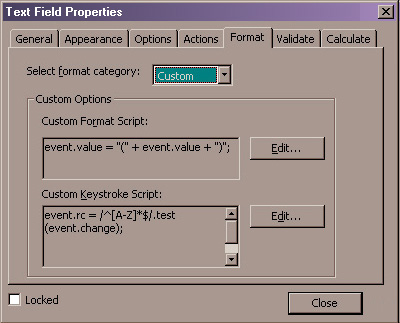 The Validate script is run when a field value is committed. When users press the Enter key or tab out of the field, they are indicating the entered data should be put into the field value, called “committing” the value. The Validate script sits between the user action that signals the value should be committed (tabbing, pressing Enter or selecting another field) and the actual value being committed. 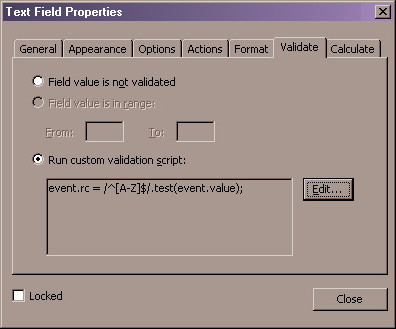 Calculate scripts are run when any field value on the document is changed. 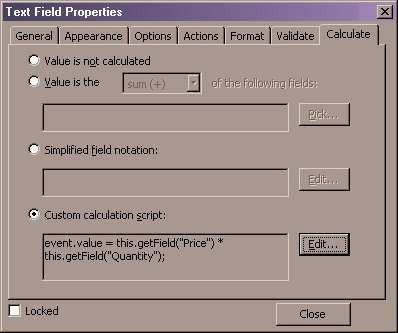 Can you post your question here and be sure to select the JavaScript category so our experts can help you out?
https://answers.acrobatusers.com/Questions.aspx?listType=needsAnswers

I have a PDF form with 3 field A,B Combo Boxed and C ,Text field. I require the background property of field C to change depending on the
selected value of Fields A and B combined ...How do you do it? I am not a scripting guru. Any help would be appriciated.

Can you post your question here and be sure to select the JavaScript category so our JavaScript experts can assist you?
https://answers.acrobatusers.com/AskQuestion.aspx

I am currently creating a fillable form for travel expenses and part of the form originally used an Excel spreadsheet to complete the calculations on the number of meals at a certain price point to give the final meal per diem. Can I do this in Adobe? I am currently using Acrobat Pro 9 and LiveCycle Designer ES 8.2

I am trying to create a script that takes the birthday in one column and calculates the age in the next.  I have the birthday column formatted as dd/mm/yyyy.  Is there an easy way to do this?

Have you seen this article? It has the script you want in it.
https://acrobatusers.com/tutorials/formatting_text_fields

However, your question isn’t very clear. If you mean you want to automatically apply the script to all the fields then you’ll need to use the “field.addScript()” function. The trick for dealing with any kind of table scripting is to have named your fields in a regular way so that you can loop over them in an organized way.

How do I add a convert to uppercase script to all text fields in a table in a form in acrobat PRO XI as the user enters data?

To avoid having to manually add the script to each text field.

Michael,  The formatting and validation functions are most likely to be defined in a Document Script.  Assuming you are on Acrobat X or XI, look on the “Tools > JavaScript” Panel for the Document JavaScripts option.

I am not a code writer so this question may be ridiculous.

I am using an existing form to create a new form.  The existing form uses scripts to validate some entries and format dates.  The scripts are simply names like CS_PDF_V and I have no idea what the code is for the script.  I think it may have been set up as a variable so the variable could be referenced in the formatting dialog box, but not allow someone to alter the actual code.

The original form only allowed 60 characters in a field, but I want to change that to 80.  If I change it in the “Text Field Properties” window the “options” tab it allows me to type more information, but when I hit enter, or tab I get an alert box saying only 60 characters are permitted in this field.  in the filed properties box on the validate tab “Run custom validation script:” I see “CS_PDF_V( event );” [without the quotes].  This makes me think the code limiting the field to only 60 characters is in a variable called “CS_PDF_V”.  I can’t seem to be able to find where that variable is defined.  I’ve opened the JavaScript console, but I still do not see the code.  It must be in the somewhere.

Any help with this issue is greatly appreciated.

how do you insert date on form.  adobe acrobat 10.0 will not insert date. please help