This tutorial shows you how to work with the JavaScript features in Acrobat X. See what the all-new Acrobat DC can do for you.

Scripting for Actions in Acrobat X

Learn how to use the Actions Command Palette to create an Action that requires scripting in Acrobat X Pro and Suite.

An Action in Acrobat X Pro is a set of pre-defined commands that are applied sequentially to a list of PDF files. In previous versions of Acrobat this was called Batch Processing, and there is a treasure trove of information on creating and using Actions in articles and videos on this site. There is also an Actions Exchange, offering all kinds of fancy Actions -- created by users – that can be downloaded.

The "commands" that make up an Action are, for the most part, the standard operations on the regular menu items and tools in Acrobat, such as deleting a page or applying security. Anyone who is already familiar with Actions will know these commands are fairly static. They are set up to perform a specific activity, such as deleting page five of a PDF. There is no way to set up the page-delete command to be more flexible, for example, to delete the second-to-last page, for which the specific page number will change with the document length.

To create an Action where the operational parameters are flexible requires scripting, and fortunately, the Actions Command Palette includes a command that runs JavaScript (Figure 1). In fact, most of those fancy Actions on the Actions Exchange are implemented with the "Execute JavaScript" command.  It is worth the time to examine the scripts in these actions.  It is simply not possible to get the kind of advance functionality used in these Actions any other way.  This article will explore the rules and techniques for writing such scripts. 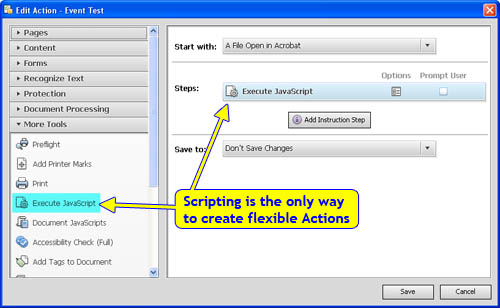 Figure 1 – The Execute JavaScript command provides the only way to apply automatic, non-interactive flexibility to an Action.

Scripts in the "Execute JavaScript" command

There are some big advantages to running a script in an Action, as well as a number of serious limitations. It's important to understand both sides in order to write efficient, error-free scripts. In addition, as we'll see, to get the most out of an Action Script, a little creativity is needed to work around some of the limitations.

Most of the scripting used in an Action is very straightforward, and is written in exactly the same way as the code placed in a folder-level trusted function. For example, here is a single line of code that places the file name along the bottom edge of all pages in the PDF using the watermark function.

The script is simple, but it makes a custom change to the PDF that could not be done with any of the other Action Commands. If the document has an existing watermark, the new footer text is added to that watermark, so the code does not destroy anything already on the PDF. Notice that event.target is used as the document object. In this code, the "this" keyword could also have been used, but using the official, and explicit reference to the document object is a much better practice

Saving to a custom file name:
The Actions Dialog provides several options for saving the files operated on, including options for renaming the files with prefixes and postfixes. However, these additions to the file name are static. A script is the only way to provide a flexible, custom-file-name option. For example, here is a short script that appends the current date to the file name and saves it into a subfolder of the original file.

It seems like there is a lot to this script, but it is really just a simple set of text manipulations to build the destination file name and path. This script must be the last step in the Action, and the SaveAs portion of the Actions Dialog must be set to "Don't Save", as shown in Figure 1.

Building a report file
This technique is very useful for analyzing documents. It's used by the Create Comment Summary Action in the Actions Exchange. The code in that example is very complex. A simplified version will be presented here. For this example, a script will be created that reports the number of pages for each document run through the Action.

The document object for the report doc is stored in the global object. The first line detects the existence of the doc object by testing a property of that object. If the document was never opened, or if the user closed the report doc from a previous run, then the JavaScript engine will throw an exception and the catch block will open and initialize the report document. This is just one method. The report doc could have been detected in a different way. For example, the open report doc is also listed in the app.activeDocs property.

The location of the report document is completely arbitrary; it could be placed anywhere that is convenient. In the Create Comment Summary Action, the report document is created at runtime using the app.newDoc() function. It also could have been done using the Report object. The important bit is to have an open PDF document to act as a repository for the collected data. It's also a good idea to include fields on the report doc for displaying the time and date of the Action run, and maybe even the user name.

Once the report document is open, data will be added to it every time the Action is run. To create a clean report document, this file should be saved to a new location and closed. The save action can be added to the startup code in the catch block, for example saving to the folder of the first document. This is the best place to put an automatic save. There is no easy way to know when the last document is processed, so the save, if it is added to the code, has to happen when the document is first opened.

The business logic for this script is only two lines of code, i.e., the last two lines in the script. Everything else is preparation. The script starts off by testing for both the existence of the report doc and the global.nPgLen parameter; both are necessary. If either does not exist, then the report document is opened and the user is asked to enter the page length used to truncate the PDFs. The code setup guarantees the user will only be asked to enter this information at the beginning of the Action execution. This is where things get interesting.

The response box is displayed inside a while loop. This is a simple technique for ensuring the user enters a valid value, in this case, a number. The loop will continue to display the response box until the user either enters a valid number or cancels the Action altogether. This second bit is handled by an alert box that is only displayed if the data entered by the user is invalid. The user is asked if they want to continue the process. If they answer "yes," then the response box is displayed so they can enter another number. If they answer "no", then event.rc is set to false, which aborts the Action. Notice that event.rc is used to qualify both the "redo" loop and the main business logic for the Action.

All the techniques used here are also used in the Extract Commented Page Action, available in the Actions Exchange. The code in that Action is much more complex than what is shown here, but the technique is the same. In a working script, the popup messages should be more verbose and information about the process should be written to the report document.

How to create a new Action using Acrobat X

How to use the Action Wizard in Acrobat X